Text and Photos from this article by David Rahn.

The Spiller brothers always seem to have interesting building and restoration projects underway, and this Spring is no exception, with several jobs ongoing in a variety of materials, including a stem to stern restoration on a classic wood tug for Harken Towing. Just in front of that huge project, tucked away almost out of sight, is a smaller, more modest rebuild that should be of interest to many small-boat fishermen. Here Bo is widening Calvin Siider’s aluminum gillnetter/shrimp trawler Maile III by adding two sponsons to the outside of the hull. The objective is to increase stability and working area and at the same time, in true Spiller fashion, Bo’s giving the boat a new flared bow and a more graceful sheerline. 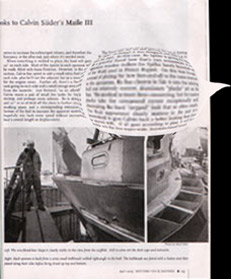 intervals along the shear and extending down to the chine. Up forward the bottoms of the bulkheads start off level and then gradually take on a few degrees of downward twist as they reach the stern. This serves to increase the submerged volume, and therefore the buoyancy, at the after end, just where it’s needed most.

When everything is welded in place, the boat will gain 22” on each side. Most of the spaces in each sponson will be voids, filled with foam flotation. However, in the mid-section, Calvin has opted to add a small extra fuel tank to each side, plus he’ll use the adjacent bay as a storage area accessible from the lazarette. Just forward, “as an afterthought,” Calvin wants a pair of small live tanks for holding his shrimp, and perhaps some salmon. Bo is also going to add 20” or so of deck off the stern to further increase the working space, and a corresponding extension on the bottom of the hull to increarse the apparent waterline and hopefully win back some speed without increasing the boat’s overall length or displacement.

The biggest challenge for a project of this type is fairing the new work into the old and getting the whole thing to look “right,” as though it was designed and built that way from the start. In this case, Bo Spiller is giving the Maile III a graceful flared bow that’s very reminiscent of the signature wooden trollers the Spiller family launched out of the Wahl yard in Prince Rupert. On this boat though, instead of plating the bow fore-and-aft in the same manner as the sponsons, Bo has chosen to fair it into the existing hull use relatively narrow, aluminum “planks” set on the bias. The method is more time consuming, but the narrow planks take the compound curves well, eliminating the hard “stepped” look that so often results. The final appearance clearly matters to Bo and he’s determined to give Calvin back a better liking boat than he started with. If all goes according to plan, it will be a double win for this super-wide, Sointula-based vessel.