Commodore’s Boats Ltd and owner Bo Spiller have been featured on many occasions in magazines, newspapers, video, web sites and other media over the years. The following are some examples of some of that publicity.

On many occasions such as the Yukon News web article, it was to feature a particular boat project (M. V. Dorothy) and in other instances such as the Vancouver Province it is to feature Commodore’s entire craft and history.

Commodore’s Boats appreciates the publicity as it strengthens the Commodore’s brand and we welcome any opportunity to showcase our trade. For more information on any of our current or past projects or to schedule an appointment please call our office at (604)247-2628 or (604) 24-7-BOAT.

Thank you for your interest and enjoy the following publicity Commodore’s Boats has received. 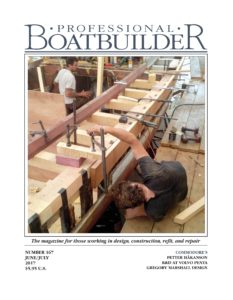 This Vancouver shipyard specializes in restoring and refitting large wooden boats by preserving the tools and skills of the past – and incorporating modern materials.

Bo Spiller is a young shipwright operating Commodore’s Boats in Richmond. He has already accumulated a colourful history in and around boats. He has learned his skills through the “hands on method” directly from established shipwrights and from developing his own techniques. Now he has been taking on large rebuilds and has a thriving repair and restoration business.

In 2014 The Vancouver Province ran an article along side the video – The art of wooden-boat restoration.

The painstaking work that goes behind restoring a wooden vessel at Commodore’s Boats in Richmond, B.C.

May 2016 – Wooden boat specialist Commodore’s Boats in Richmond, British Columbia, was busy over the winter with a number of commercial fishing vessels…

The Spirit of Chemainus

Alec Spiller’s interpretation of a Glousterman Sloop design “The Spirit of Chemainus” was featured in multiple pages of the “B.C. Ferries Exploring British Columbia’s Coastal Waterways”…

Spiller is a young boat builder with some old-fashioned ideas. One of these ideas is that you are successful in the boat building business by working hard; the other idea is that wood boats make the best boats…

The Spiller brothers always seem to have interesting building and restoration projects underway, and this Spring is no exception, with several jobs ongoing in a variety of materials, including a stem to stern restoration on a classic wood tug for Harken Towing…

The decks, fore and aft, on their 1921-built, wood tug, the Viking King, were leaking so Dorothy and Ken Mackenzie gave Bo Spiller of Commodore’s Boats a call. Initially there to assess caulking up the deck seams, Bo quickly discovered…