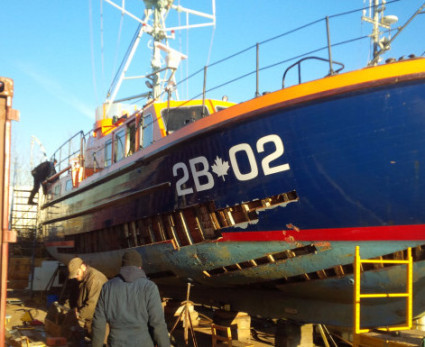 In 1944, the Steveston Lifeboat previously known as Artists Life was built by the United States Navy in Pearl Harbor as an Admiral’s barge, reportedly used by Admiral Nimitz as his launch at one time. In 1988, the classic wooden craft was purchased by marine artist and official Canadian naval war artist, John Horton, who uses it as his research vessel to this day. When John isn’t cruising the coast doing research for his next painting, he sails the Steveston Lifeboat on the Fraser River, where the striking orange and blue paint is a familiar sight as it conducts search and rescue and safety patrols, and escorts commercial fishing traffic along the busy waterway. Flying the flag of the Canadian Lifeboat Institution, the Steveston Lifeboat operates out of its home port of Steveston, south of the Vancouver International Airport in Richmond, B.C.

In December 2014, the Steveston Lifeboat previously known as the Artist Life had an accident whilst on a routine training mission in the lower Fraser River, fortunately there were no serious injuries. As a result of that accident the boat sank but was recovered and transported eventually to Shelter Island Marina and Commodorès Boats for repair.

Here is a short video depicting the accident and the rich history of the boat.

The Steveston Lifeboat has a rich history and with the support of Commodorès Boats, John Horton and many volunteers and other supporters this classic will be back patrolling the Fraser River soon.   For more information on John Horton the artist, visit www.johnhorton.ca.