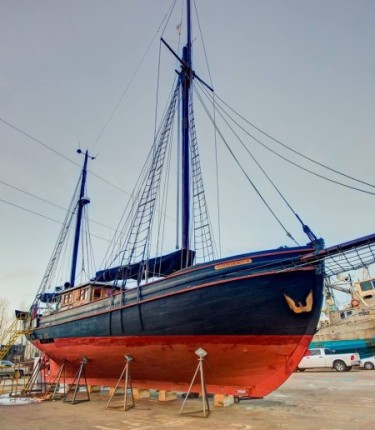 Wooden boats with a colourful past included a tugboat who appeared in The Beachcombers TV show and a 112-year-old schooner which entertained the rich and famous.

Nothing could be further from the truth when it came to three vessels that were berthed in a dry dock in Richmond.

The boats, all wooden and boasting 329 years of history between them, recently called restoration specialists Commodore’s Boats in east Richmond their home for a short while.

“It’s pretty rare to have had all three of these wooden boats here at the same time as they’re probably the oldest of their kind in B.C.,” said Ryan Galovich, business development manager for Commodore’s Boats at Shelter Island Marina, on Graybar Road near Highway 91, on the far east end of the south arm of the Fraser River.

The Providence, built in 1903 in Norway, is believed to be the oldest of its kind in B.C., said Galovich.

“The 1904, the Maple Leaf, is a schooner and is the oldest B.C.-built boat still floating; she’s been here for more than two months and will be here for another week or two. She’s in for a stern restoration,” explained Galovich.

The Maple Leaf is a classic, 92-foot schooner made of coastal Douglas fir and cedar and was, in its day, considered the west coast’s most expensive yacht.

She was designed and built by William Watts, a well-known Canadian shipbuilder and designer at the time and was billed as the most expensive pleasure craft on the Pacific Coast. She was a private yacht for prominent businessman Alexander Maclaren and wore sail #1 for the Royal Vancouver Yacht Club.

As well, she was the first ship north of San Francisco to have electric lights and carried her crew and society guests into the Gulf Islands and the fjords of the B.C. coast.

However, during the First World War, her lead keel and brass were stripped for the war effort. She was then converted to a halibut fishing vessel.

The 1912-built boat is the Swell, a former tugboat, which once starred in an episode of the CBC’s popular primetime show The Beachcombers. The episode, airing in October 1974, was called The Swell. She comes in and out for regular maintenance.