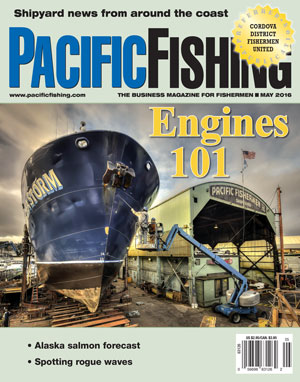 Wooden boat specialist Commodore’s Boats in Richmond, British Columbia, was busy over the winter with a number of commercial fishing vessels, along with steady work converting fishing vessels to yachts.

The 62-foot seiner Nafco was at Commodore’s for repairs during the March herring season after it hit bottom, causing keel and keel shoe damage, said Ryan Galovich, business development manager at Commodore’s.

“Some scarfed sections were knocked out, and there were some planking issues – bruised and scuffed planks on port side,” Galovich said. Other problems included disturbance to copper cooling pipes, the sonar dome, and the sounder transducer.

The Adriatic Star, a 68-foot wooden fishing vessel, was in and out quickly March 10-11 for planking and patching to stop persistent leaks.

The Western Commander, a 75-foot seiner, was in for planking, outside cooling pipes, caulking, and repairs on the keel shoe.

The Princess Colleen, a 55-foot Frostad-built wooden boat, was in to repair leaks and plumbing. It also had the bow thruster rebuilt.

Commodore’s Boats has recycled and repurposed an 1880s-era Rumely Co. steam tractor. With wheels removed, the tractor is being used as a steam generator to steam planks.

For a link to read the article click here