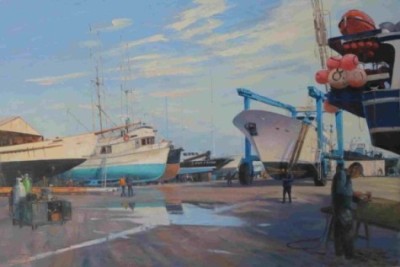 Earlier this week John M. Horton C.S.M.A. F.C.A. Marine artist and owner of one of Commodore’s Boats current projects; Steveston Lifeboat visited the shipyard as he usually does to monitor the progress on his boat’s refit. John surprised the shipwrights by revealing his latest painting release – The Shelter Island Shipyard, Richmond, BC, Canada.

On the very right of the painting John has depicted the Lofoten – 56′ fish boat which had some repair work completed in December 2015. On the left side of the painting is one of Commodore’s current projects The Schooner Maple Leaf.

The photo of that painting that is the feature image of this news web article does not do the original painting justice as the color is spectacular. It is amazing to me how John captures the various shades of color not only in the sun but in the puddle of rain water sitting on the cement dock. Looking at the painting is like looking out from the window office of Commodore’s Boats. John’s attention to technical accuracy and detail is legendary.

John’s oils are highly prized by galleries, museums and private collections the world over. He has earned the hard-won respect of buyers, mariners and colleagues alike. He is a member of the Canadian Society of Marine Artists, the Federation of Canadian Artists, and The Honourable Company of Master Mariners of Canada. In the late Dennis Brook-Hart’s definitive Twentieth Century Marine Painting, he is the only Canadian marine painter mentioned. In 2002 he accepted the Canadian government’s invitation to record the nation’s navy in action against terrorism in the Arabian Gulf. Through his work Horton assists many worthwhile charities.

John won a commission with his design of a ketch that was released as a commemorative coin in the “Tall Ship” collection as produced by The Royal Canadian Mint.

For more information on John Horton, marine artist and to see the other spectacular paintings John has created please visit www.johnhorton.ca