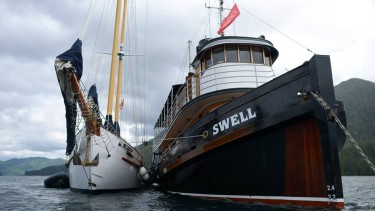 Commodore’s Boats wishes to congratulate our friends at Maple Leaf Adventures for the following recognition.

Commodore’s Boats is proud to have performed the full restoration of the Tugboat Swell and we currently have the Maple Leaf schooner in for service. Congratulations!

VICTORIA – An expedition aboard a converted tugboat to B.C.’s Great Bear Rainforest is on Fodors’ list of the world’s best cruises for 2016.

The 12-passenger Swell shares company on the list with a fleet of new ships including Royal Caribbean’s 16-deck Harmony, the world’s largest cruise liner.

The tugboat, built in Vancouver in 1912, had its maiden voyage as a boutique expedition ship last April. Its history of service along the B.C. coast includes an appearance in a 1974 episode of CBC-TV’s “The Beachcombers.”

The Swell has six private cabins, each with ensuite bathroom and shower, and carries kayaks, inflatable boats and fishing gear.

Victoria-based Maple Leaf Adventures is offering sailings aboard the Swell in 2016 to the Great Bear Rainforest from ports including Port McNeill, Bella Bella and Kitimat.

A sample eight-day itinerary in May starts at $4,720 per person and includes rainforest walks, fiord cruising and a visit to the First Nations community of Klemtu.

See the full story at: